LITA CABELLUT, ART IN THE BATTLEFIELD

LUCIA, MANGALA, PETRA, Yerri, Simha, or Juana, who knows at this point which of the models is lying there, lying on the floor, about to start the journey that leads from the painted portrait to the mass of canvas. Pure flesh of metamorphosis, battlefield: the creative process today is nothing else for Lita Cabellut (Sariñena, Huesca. 60 years old), a Spanish, gypsy, Dutch, and ranked artist -the order is not essential- that one good day of Four years ago, in her studio, just finished a painting, she looked at it, took it out of the frame, threw it, began to dance on it, punched it, tore it and gave birth to another work of art. Her collaborators and her children asked her if she had gone crazy. The gallery owners told her what that was and that, of course, it was not going to work. "That" was a kind of mass in the form of a giant Kleenex recently used by King Kong. But it was different. Everyone took her reason away. She stuck to her guns.

Today Lita Cabellut's paintings-massage are sold for figures of six figures, as well as her flat, cracked, and scratched paintings, under which, in the studio, there are small piles made with the material left over after the process of aggression to which the artist subjects them, who prefers to call it "transformation". Collectors chase her works. The dealers rub their hands together. She is already thinking about new adventures. She would say that the achievement of her goals gives her hives: "Many times we artists only think about the final result, and we also want it to be like what we had in mind because that will fit aesthetically or socially with what is expected of us, but the only thing we accomplished is to move away from the true intention of art, which is not something that you can guide. The important thing is to see in the dark and not be afraid."

We visit the artist in her home-studio on Frederikstraat, in the heart of The Hague, the city where she has lived for four decades. A small door gives access to a private driveway that leads to a patio in front of a beautiful wooden house. In reality, the house consists of a succession of wooden houses and a succession of patios with plants and trees, it is what we could call a mansion, a dream, to be exact, all of it full of high-end antiques, carvings of virgins, busts and stone Christs, beautifully crafted decorative objects, huge pickled wooden doors from an Egyptian orphanage, hundreds of art and literature books, and paintings from the hand of the owner of the possessions. There in the background is her room under a glass dome –“because I like to see the stars from bed"–; beyond, a small swimming pool painted black and open to the sky –because the doctor told me that I had to swim"–, and even further, a glass door that gives access to the enormous studio.

Lita Cabellut breaks through the cold Dutch morning like a whirlwind. For about 10 hours she will barely shut up, not even before the plate of lentils with chorizo and the polvorones that will make up the (extraordinary) ranch of the day. Almost everything she says makes sense, and to top it all off, she's funny. Dyslexia leads her to invent words and words that come to color the environment with a surreal air (“photos in high resurrection", she will pronounce), and it is not ruled out that this same dyslexia also acts as a motor of his artistic processes. But along with the laughter and the noise, in this woman who paints clowns, popes, prostitutes, drug addicts, homeless people, the mentally ill, noblemen from the Dutch Golden Age, dwarfs and singers –maintains that Camarón is one of her sources of inspiration– there is like a permanent shadow of darkness. And she knows it and, in addition, she takes it to her paintings. At the same time, her paintings transport her to it. It is a sort of unwritten contract between the artist and her creatures, a mutual collaboration in which neither pleasure nor fury... nor cruelty are lacking. It must be said that this successful woman, who is equally disputed by gallery owners, painting collectors, book publishers, film producers, and opera set designers, never lacked material in her biography, neither for light nor for darkness. She was born in Los Monegros, in a gypsy family. Her parents emigrated to Barcelona when she was a baby. Her mother abandoned her at the age of 3 and she was raised until the age of 10 by her grandmother. The girl spent those years running around among the whores and transvestites of Barrio Chino, running errands for them and earning a few coins among the landscape of syringes and used condoms behind the Rambla. Her grandmother died and she was admitted to an orphanage until, at age 13, she was adopted by a wealthy couple from El Masnou. One day they traveled to Madrid and took her to the Prado. After marveling at Goya's paintings and Rubens's Three Graces, the brood told Paquita, her new mother: “I want to do this, paint”. “Well, I'll give you a private teacher," answered Paquita. No sooner said than done: Cabellut began with the Fauvist teacher and painter Miquel Villa.

A few years later, at the age of 19, he left with a scholarship to study at the Gerrit Rietveld Academy in Amsterdam, at that time one of the most groundbreaking art schools in Europe, where she began doing abstraction before moving on to figuration. She remained to live in Holland. She became the girlfriend of a Mexican violagambist and her children would be born there. She still did not know to what extent motherhood would prove decisive in her career as an artist.

"I became a mother and began to focus on the spiritual part, although I did not feel religious at all. The impact of being a mother was for me something so spiritual and so above me that I began to want to convey those feelings, and that was when I began to make the series The Form of the Spirits. But I saw that I lacked skin, that my paintings were too smooth for what I wanted to tell, too kind". She realized that what she needed were "scars of life". She visited two laboratories where they created for her a 12-layer paste that remains today, 25 years later, the material basis of her work. "With it I was able to paint those scars. They are the best pictures I have ever painted. But, of course, you cannot stay only in the scars. You have to evolve." The trampled, beaten and bent paintings arrived; the mixture-paintings arrived, in a certain way a re-updating of crude art. Dubuffet would have felt wonderful in Lita Cabellut's studio.

It is quite impressive to see this not very tall, strong, and energetic woman lying on the floor, sweating and panting as she folds and compresses the canvas with the help of one of her collaborators, Denis, a Spanish boy who went to study music to Holland and today works at Cabellut's. There are several moments in which it seems that the work is already finished, but no. The punches, the stomps, the rivets with the electric stapler and the pinches with the pliers follow; the calvary of the canvas continues as a creative process and as a metaphor of the combat between before and after, between past, present, and future. After a 20-minute fight with wounds and scrapes included, a kind of childlike happiness emerges. Lita Cabellut will call it El Grito de la Flor (the Scream of a Flower), and that is what it represents: a kind of flower bud painted on the inside that howls. It has not been a kind or pleasant moment, but rather a tense and almost cruel one: "Creating hurts, sometimes you really break, you suffer, you cry, because approaching the truth hurts. It looks like a battlefield. In battle, if you think too much, you die. What matters is the process itself, the moment: the past does not exist, it is an illusion of our memory. And the future is an illusion of what we want, it doesn't exist either. And being in the present is the hardest thing for us, because you have to live in the present, and living is painful. The human being has not yet learned to do it. It is always taking records of the past and trying to anticipate the future."

As has already been said, her gallery owners, her collaborators in the studio, and even her sons Arjan, David, and Luciano asked her if she had gone crazy. "But I was right. The more I learn about the artistic process, the more aware I am of how we have labeled and amputated and reduced art, how we have put art in a corset."

Cabellut is now immersed in a documentary about the gypsy origins of Charles Chaplin, A Man of the World, in which the granddaughters of the genius Carmen, Dolores and Aurélie, and his son Michael Chaplin take part. The film, co-produced by Spain, France and the Netherlands and directed by Carmen Chaplin herself, delves into the Romani roots of the family, and very especially into that of Hannah, the mother of the actor and director, whom she gave birth to in a gypsy encampment outside Birmingham. It is a work that will have a part of reality based on testimonies of personalities from the gypsy culture and another part of fiction in which Lita Cabellut is the artistic director, she has created the costumes -some of which can be seen on the walls of her studio- and has worked on the animation part with the Submarine studios in Amsterdam, in addition, to also appear as a producer.

At the same time, she continues with her new pictorial series, Women of the Night, about the world of prostitution, a gallery of large-format portraits inspired by works by other artists (Rembrandt, Léger, Kupka, Bacon, Botticelli, Paula Rego ...). They are tormented portraits on torn canvases, in which the faces and bodies of real prostitutes contacted by the artist emerge under the wild grattage. Beyond the pictorial dimension, she wants to denounce the conditions of slavery in which thousands of sex workers live around the world, starting with the Netherlands, in a project that includes a traveling exhibition of the works and a series of round tables and discussions.

And since the days for this excessive woman seem to have 34 hours, she also finds time to make painting and poetry books with her friend Javier Santiso, promoter of the publishing house and at the same time the artistic-literary club La Cama Sol. Her new toy is called La Barraka, a label where both will publish an artist's book once a year with a print run of only 30 copies signed, numbered, and intervened by her with an original included. A project that has her fascinated. But let no one doubt it. The day will come when all this ends up becoming material for the benefit of inventory. Because Lita Cabellut will already be doing what she likes the most. Sailing other tides. 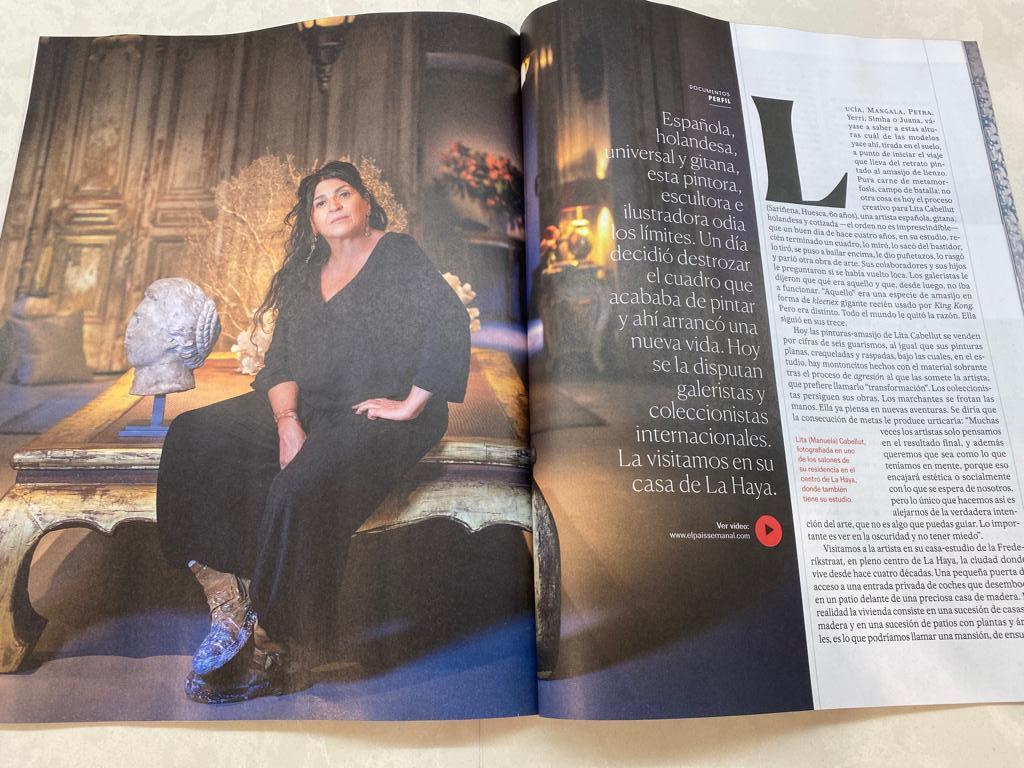